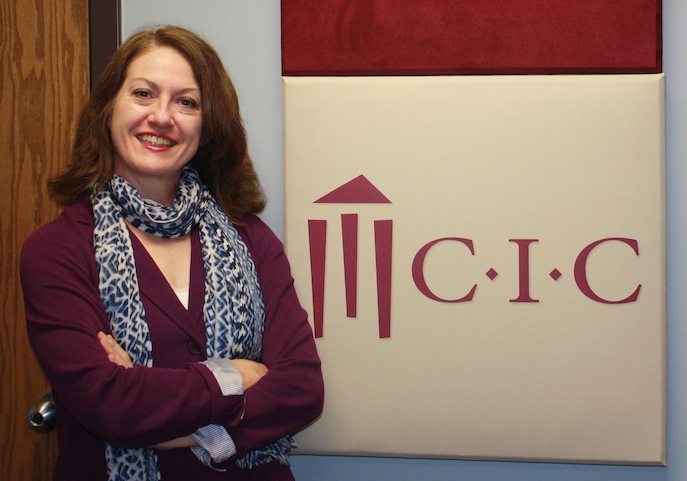 Barbara McFadden-Allen is executive director of the Committee on Institutional Cooperation (CIC), a consortium of 15 research universities, including the members of the Big Ten athletic conference and the University of Chicago.

At the CIC, we help our universities work together so they can accomplish things better, faster and cheaper than they can by acting on their own.

When I came across the Message House method, it just made so much sense to me that we’ve built it into the curriculum of a leadership program for university executives that I’m involved with. Now my colleagues in the consortia world of higher education have become familiar with it, and use it to craft messages for their organization. But, interestingly, I’ve heard from institute fellows saying that they use the method also in the day-to-day work that they do in terms of communicating with their consortium colleagues or as a way to manage meetings and projects. It’s a tool for them to organize their thoughts and be more effective in their interpersonal communications.

For example, one of my colleagues at my office, Charity, says that she now routinely thinks before she gets on a conference call with a committee, “What’s my Message House?” It’s a good framework for thinking.

I’ve also used the Message House method to help train university administrators in China. Our goal was to help them understand how to build intricate institutional contracts or agreements for working together. The method was wildly successful with this Chinese audience. They loved the idea of Message Houses and were putting it to immediate use in terms of identifying possible areas for action among the U.S. universities and Chinese Universities. They used the Message House to frame what they wanted to accomplish.

The method also helps build unity and community within an organization. At least in our experience, our staff is grateful for quick messages, quick sound bites that they can use in their communications with their colleagues, and with people they’re trying to influence. The Message House technique is useful for generating these sound bites.

Message Houses have changed how we talk about our work. For instance, until we stumbled upon the technique, it would take us three paragraphs to explain why we have invested in a fiber optic network that our universities co-own and operate. We would go to great pains to explain that the telecom industry was deregulated, so there was dark fiber available to purchase, and bla-bla-bla. People were looking at us like “What? What are you even talking about?” We realized we had to become much more disciplined with our message. We wanted people to feel proud of the network and see its value. We realized that no one cares how we got the network. The important thing is that we co-own and operate it, and that it allows us to share research data faster and cheaper than any other group of universities. Since this is a multi-million dollar project, critics might ask: Why don’t you spend this money on developing courses for students? So we say, yes, we’ve made an investment of $20 million, but we’re saving $5 million a year, and that money is available for curriculum development and instruction.

The Message House helped us modify our message and the verbiage.

I think the method works, first and foremost, because of its simplicity, elegance and construction. It grabs people and focuses their attention. The image of the house is deeply compelling. Also, because there are only four steps to generating messages, the approach is really easy to remember.

I believe that good leaders have to be powerful communicators. They have to over-communicate. But something that’s not often talked about is the need to for messaging discipline. And I think that’s why Message Houses are so powerful. They make it easy to stay disciplined and focused.